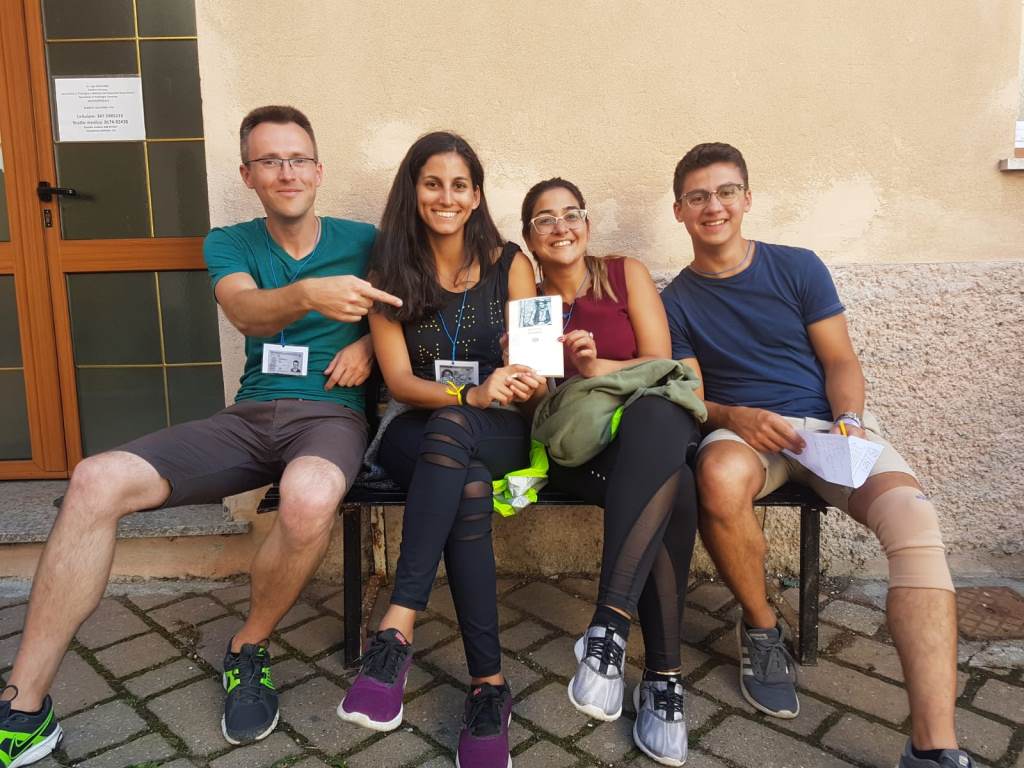 The ever first time I hear about Erasmus+ projects I did not believe such a thing does really exist. And every time I try to cheer people to participate in such programs I got often the same exact reaction. Is it actually all covered? How do you trust people if you don’t know them? Do you need C1 English? Does your career need to be somehow related to the topic?

It is difficult to convince people to enroll in such a program, and it is difficult to let them know how incredible Erasmus+ courses are. Even showing pictures, videos and telling the funniest moments, people just do not get to be in your shoes.

I have not participated in many projects so far, just six, which is not quite a lot if you ask fellow mates within this world. Yes, it is a whole world with several opportunities being offered for open minded youngsters (over all, European but increasingly open to non-European and neighboring countries), willing to get out of their comfort zone for some days and jump to the unexpected.

But… what is exactly Erasmus+?

It is a program carried out by the European Comission with a 14.7 billion euros budget which purpose is to provide educational, training, youth and sports opportunities to over 4 million Europeans to study and gain experience abroad. Reducing employment, promoting adult learning, encouraging youngsters to take part in European democracy, supporting innovation, cooperation and reform and promoting cooperation and mobility within countries is the way to achieve so.

There are really, really several opportunities offered by this huge program, clustered together within the so called Erasmus+. We all know someone who has participated in an Erasmus academic exchange in which a university student goes abroad for whether a semester or a whole academic year. Well, that is only one single example of all the different types of activities we can carry out.

I have participated myself in six youth exchanges and trainings, so I would love to encourage some of you to take part in one of this amazing experiences that teaches us that we have far more similarities than differences and, in any event, differences has nothing to do with a passport, a nationality. You learn important figures and facts about the topic the course is about (let’s say, migration, unemployment, new technologies, educational systems, LGTBI rights… or whatever you can actually thing of), but also and over all you acquire life assets that are difficult to put down into words. You learn not to generalize, to respect, to listen more, to be aware of someone else’s lifestyle without imposing yours, and to develop personal skills talking to people you may not have the opportunity to talk with back in your own country.

There you go. My last training was just a couple of weeks ago. In a beautiful northern region called Piamonte. It is, as you can already image, not a top touristic place in Italy, far away from the astonishing southern beaches, lovely towns and from the endless capital Rome. More specifically we were in a little village called Bergolo, inhabited by forty people. Yes, forty. And we were around thirty for the project, so we were in fact doubling Bergolo’s population for nine days. That’s why we had the best welcome from its charming major.

But the population is not the only thing that first amazed us. Bergolo happens to be a hotspot for art, hosting several art contests and displaying all along their walls several paintings, sculptures and any other forms of art you can think of. Bergolo itself is a masterpiece.

In this case, it was the NGO L’Arca del blues who hosted us in this charming place. A community hostel was chosen, in which we were placed in double or triple suites. And I say suites not for the hotel stars, but for these thrilling views to enjoy sunrises and sunsets.

The name of this training was “A new path” and it was mainly focused on migration and refugee flows. Since it was a training, and not a youth exchange, the first two days were doomed to host each country’s workshops. So it was basically the seven participating countries (Italy, Greece, Lithuania, Tunisia, Lebanon, Jordan and Spain) who had to prepare a workshop on a chosen topic related to migration.

As part of the Spanish team, we made our minds up for “walls and barriers”, referring mostly to the Melilla fence in Southern Spain, but later on we intended to broaden the idea and raise awareness not only on physical barriers (like walls) but also on natural barriers (the Mediterranean Sea, the Arizona dessert… ). So basically we prepared two workshops. And here I would like to underscore that these trainings are based on non-formal education, so the dynamics and modus operandi are to educate through games and simulation processes instead of formal education as we know it from our national educational systems.

So coming back to the Spanish team workshops, the first one was an energizer game called “La Araña” (“The Spider”), which entails a two team game in which one of them (made up of the majority of people) need to cross the border as a whole group, at the same time. On the other hand, the other minority group are representing the police authorities whose aim is to capture them while crossing an imaginary line. If members of the first team (representing the immigrants) are caught, they become part of the second team. We were just seeking to put on the shoes on immigrants for a while, and simulate the moment in which they attempt the jump fences/walls.

The second workshop was a so called role play. We divided out mates in six groups of five, and wrote five different immigrant characters. One of them was the “smuggler” leading a human trafficking network devoted to crossing the Mediterranean Sea by boat. The group as a whole ought to discuss their characters and to convince the others they were not the smugglers by telling the story they left behind in their home countries. The aim of this second workshop was essentially to realize most of the migrants move because they do not have any other option and are pushed by their own circumstances to do so, and over all, we wanted the raise awareness about the smuggler. We wanted to educate that the smuggler could be really any of them, and usually people who get involved in human trafficking or drug networks are mostly people who have no other option, it is just a matter of survival.

Conversely, the other big issue we had in this training was what the organizers called “the mission”. One evening after dinner, they gathered us together to make an important announcement. The following morning we were leaving Bergolo at 6 a.m for the next 30 hours. We were put in teams of four (my team was named “Hakuna Patata: you know what a patata is, right”? no phone, no money, no credit cards, no food, no sanitary/health products… just us, water, a regional map (not a very exhaustive one), and an old phone (not smartphone) charged with three euros just in case of emergency.

We were dropped in the middle of nowhere, and the mission was to reach a small village called Saliceto before 13 pm, which happened to be six hour far on foot. We made it through the mountains, asking locals and getting lost. We hitchhiked (or at least we tried), and we got a ride even in the back part of a tractor… it was definitely the funniest moment of the trip!

Once in Saliceto, we received an SMS from the organizers, receiving the next instructions: seek for food and a warm place to sleep tonight, and make sure we are back in Bergolo tomorrow morning by 10 am! We just could not believe our eyes. We were exhausted and starving and we were pretty sure they were actually providing us with food in our destination. So we took a deep breath, and then we tried to beg for food basically to two old men we found in the streets. No luck. We tried to ring a bell because no one else was found in the streets. No luck either. Finally, we met by chance with the priest outside the church doors, and he hosted us and provided some pasta and tomato sauce so we could cook. We were finally safe and sound… and it did not really took us a long time to be so. Once we ate, we started to accomplish out mission list of “fifty things to do”: sing a song in front of seven strangers, meet the major and have a coffee with him, attend a wedding, talk about religion with a priest etc… and… we made at least half of them… so we rocket it! Since we did not have any cameras with us, we asked some locals to take pictures of us and send them by email to the organizers, so they could see how well
we were doing.

So this was our little adventure. We had a blast, and even though it might sound a bit hard at the beginning, we were profoundly lucky to find people who were willing to lend us a hand. So remember, helping is free and makes people happy. All I can say is that we can always find kind-hearted people on the road, you just need to knock the right door!

From here I just want to thank all the uncountable people we crossed in our path and who made this experience one of the funniest and more unforgettable of my life. And to whoever may read this, I encourage you to participate in one of the several Erasmus+ experiences available, it is a life changing experience!